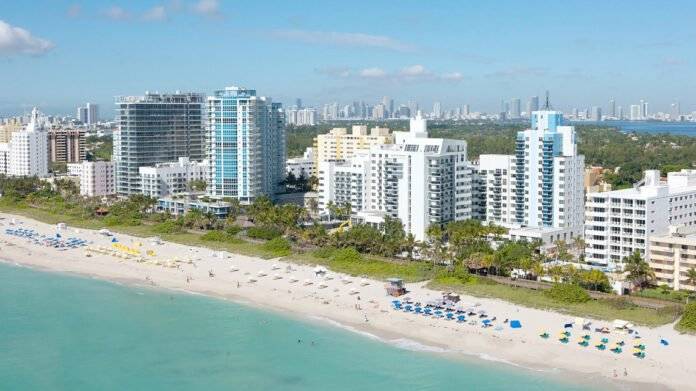 Miami is one of Florida’s – and the World’s – most popular vacation spots. Miami draws people who are searching for pleasant weather, welcoming water, soft sand beaches, and hot nightlife.

Miami is located on the Atlantic coast in southeastern Florida and is the county seat of Miami-Dade County. With a population of 413,892, it is the primary, center, and most populous city of the Miami metropolitan region, as well as the most populous metropolis in the Southeastern United States.

The greatest concentration of foreign banks in the United States, as well as several large national and international companies, may be found in Downtown and South Florida.

Hospitals, research institutions, medical facilities, and the biotechnology industry all have offices in the Civic Center. The Port of Miami, sometimes known as the “Cruise Capital of the World,” has been the world’s busiest cruise passenger port for more than two decades.

In terms of passenger traffic and cruise lines, it is the busiest port in the world, and it is home to some of the world’s largest cruise ships and enterprises. For thousands of years, indigenous peoples have resided in the Miami area.

The Tequestas inhabited the area for a thousand years before European contact.

In 1566, an adventurer named Pedro Menéndez de Avilés claimed it for Spain. A year later, in 1567, a Spanish mission was erected. Until 1821, when Spain ceded Florida to the United States, it was alternately “governed” by Spain and the United Kingdom.

The United States built Fort Dallas in 1836 as part of their expansion of the Florida Territory and an effort to suppress and remove the Seminole. During the Second Seminole War, the Miami area was used as a battleground. 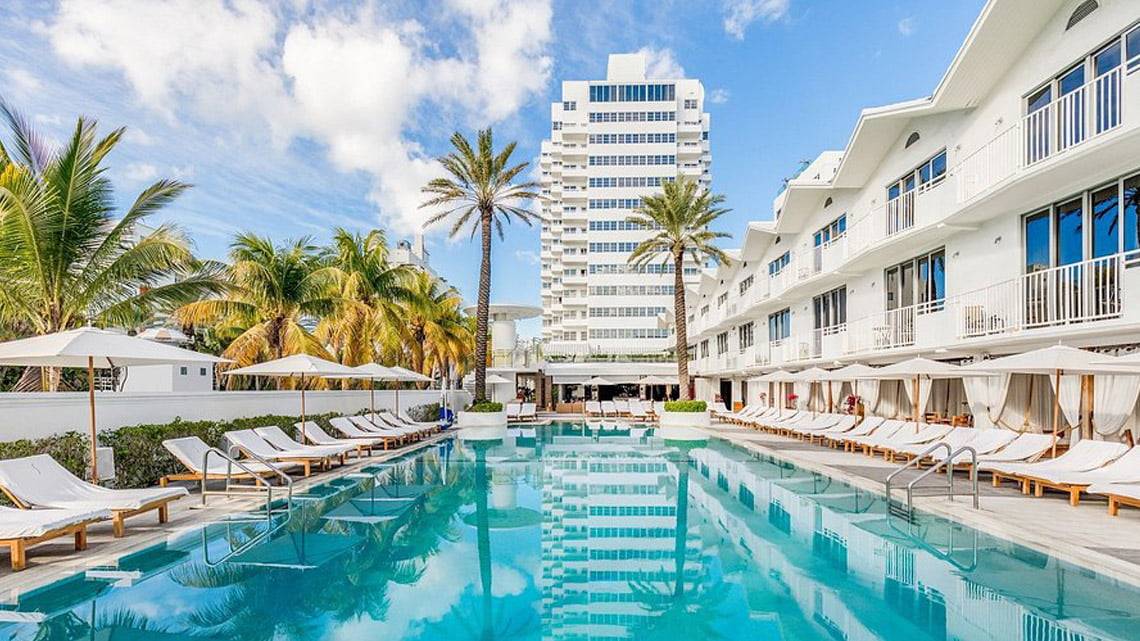 In the early twentieth century, northerners were lured to Miami, and the city grew in population and infrastructure during the 1920s. Growth was slowed by the 1920s Florida land boom, the 1926 Miami Hurricane, and the Great Depression of the 1930s.

Miami, on Florida’s southern coast, became a US defense post against German submarines when World War II broke out. Miami’s population grew as a result of the war; by 1940, the city had 172,172 people.

Following Fidel Castro‘s ascent to power in Cuba in 1959, many wealthy Cubans sought refuge in Miami, significantly increasing the city’s population. The city grew businesses and cultural attractions as part of the New South.

Miami and its suburbs are located on a large plain that runs from Florida Bay north to Lake Okeechobee and is flanked on the west by the Florida Everglades and on the east by Biscayne Bay.

The climate of Miami is tropical monsoon (Köppen climatic classification Am), which implies hot, humid summers and short, mild winters with a dry winter season. Its climate is affected by its high sea level, coastal location, closeness to the Gulf Stream, and position just above the Tropic of Cancer. 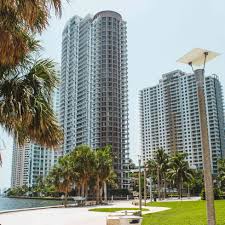 Miami is split into several sections, the most notable of which are North, South, West, and Downtown. Downtown Miami, located on the city’s eastern edge, is the city’s beating heart.

Downtown Miami has the greatest concentration of international banks in the United States around Brickell Avenue.

On Miami’s southern outskirts, you’ll find Coral Way, The Roads, and Coconut Grove. Coral Way is a historic residential neighborhood in Coral Gables that was built in 1922 and features several beautiful residences and tree-lined paths.

Coconut Grove, which was founded in 1825 and is home to Miami’s City Hall at Dinner Key, the Coconut Grove Playhouse, CocoWalk, as well as a number of nightclubs, bars, restaurants, and bohemian boutiques, is a popular hangout for local college students.

Many of Miami’s traditionally immigrant districts, such as Little Havana, West Flagler, and Flagami, are located on the city’s western outskirts.

Cultural Facts of the History of The City

The Adrienne Arsht Venue for the Performing Arts, which houses the Florida Grand Opera and is the second-largest performing cultural center in the United States after the Lincoln Center in New York City, is the newest addition to the Miami art scene.

The music in Miami is diverse. The conga and rumba were brought to Miami by Cubans from their homelands, and they quickly became famous in American society.

Dominicans contributed bachata and merengue, Colombians contributed vallenato and cumbia, while Brazilians contributed samba. Reggae, soca, kompa, zouk, calypso, and steel pan have all been brought to the area by West Indians and Caribbeans.

A huge number of musicians, singers, actors, dancers, and orchestral players flock to the city. There are several orchestras, symphonies, and performing arts conservatories in Miami.

Miami is also a major fashion center, having models and some of the most famous modeling agencies in the world.

The annual Miami Fashion Week and the Mercedes-Benz Fashion Week Miami, both located in the Wynwood Art District, are two of the many fashion shows and events conducted in Miami.

The city has a number of museums, many of which are located Downtown. Just a few examples are the Frost Art Museum, History Miami, Miami Art Museum, Miami Children’s Museum, Miami Science Museum, Vizcaya Museum and Gardens, and the Miami-Dade Cultural Center, which contains the Miami Main Library.

Art Basel Miami, the world’s largest art event and dubbed the “Olympics of Art,” is held in Miami. Every year in December, hundreds of people travel from all over the world to attend the event.

Miami’s food reflects the city’s varied population, with a significant influence from the Caribbean and Latin American cuisines in particular. It has developed a unique South Florida style of cooking known as Floribbean Food by mixing the two with American cuisine.

Floribbean food is widely available in Miami and South Florida, with restaurants such as Pollo Tropical serving it.

Cuban immigrants brought the Cuban sandwich, medianoche, Cuban espresso, and croquetas to Miami in the 1960s, which have grown in popularity among all Miamians and have become icons of the city’s diverse cuisine.

Today, they are part of the local culture and can be seen in window cafés around the city, notably outside major shops and restaurants. Restaurants such as Versailles in Little Havana are landmark eateries in Miami.

Miami is famed for its seafood, as it is located on the Atlantic Ocean and has a long history as a seaport. Many seafood restaurants can be found along the Miami River and in and around Biscayne Bay. Restaurant brands such as Burger King, Tony Roma’s, and Benihana call Miami home. 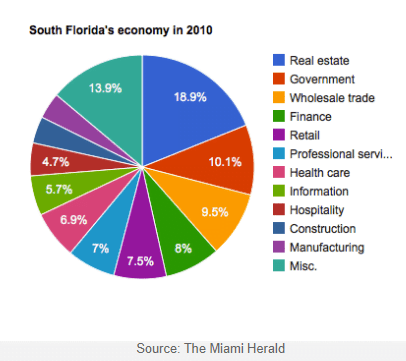 Miami is a major commercial and financial center with a vibrant international business community. The Globalization and World Cities Study Group & Network (GaWC) ranked Miami as an “Alpha minus world city” in a 2010 ranking of world cities based on the presence of global corporate service organizations.

Miami is a major television production center as well as the most prominent Spanish-language media center in the United States.

The headquarters and production studios of Univisión, Telemundo, and TeleFutura are all located in Miami. Telemundo Television Studios is responsible for a significant amount of Telemundo’s original material, such as telenovelas and talk shows.

The Port of Miami and Miami International Airport is among the busiest ports of entry in the United States, notably for goods from South America and the Caribbean.

The Port of Miami is the world’s biggest cruise port, and MIA is Florida’s busiest airport and the country’s main gateway to Latin America.

Read Interesting Facts About Miami City’s History Whether You’re Visiting or Living In The City. More Information On The Economy, Geography, And Culture Of Miami

Carnaval Miami Where To Stay and How To Get Around