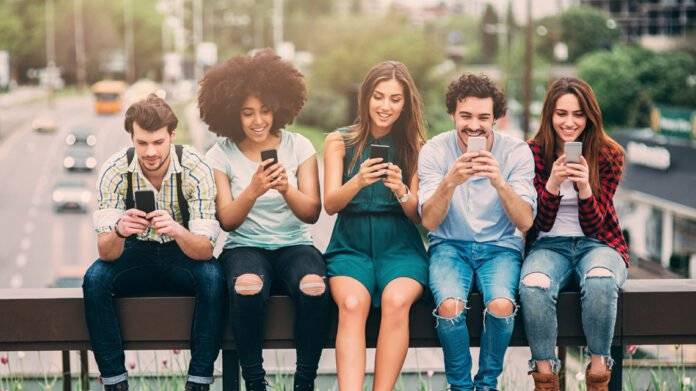 For millennials, buying a home is 23 percent less expensive than renting throughout the country, and now is the best time to buy since 2012, when mortgage rates were somewhat lower. But, especially in Miami, should millennials rent or buy?

SHOULD MILLENNIALS IN MIAMI RENT OR BUY?

According to Trulia’s Rent vs. Buy Report, buying is 36 percent cheaper than renting on a national level, based on September housing prices, where they have previously assumed a 30-year fixed rate mortgage with a 20% down payment for households relocating every seven years. This is the highest difference since 2012, when buying was 38 percent cheaper than renting. In each of the country’s 100 largest cities, buying is also less expensive than renting.

However, we discovered that the math is different for young households (ages 25-34), who move every five years (*) and can only afford a 10% down payment (**), according to the Census Bureau’s 2014 American Community Survey and a new Trulia consumer poll. Rent vs. Buy crunches the math for these would-be house owners in this edition.

We used a 3.85 percent mortgage rate on a 30-year fixed-rate loan, itemized federal tax deductions, and a 25% tax bracket to compare the expenses of owning vs renting for young house purchasers. Using such assumptions, buying is not only 23 percent less expensive than renting nationwide, but it is also less expensive in 98 of the country’s top 100 markets.

But, putting personal preferences aside, here are the present economic conditions that are influencing today’s market for Millennials considering whether to rent or buy Real Estate. Since 2012, national home price growth has surpassed rent increase. The rent side of the buy vs. rent equation benefits from this. However, after increasing to 4 percent or higher in 2013 and 2014, interest rates have dropped to near historic lows, now hovering around 3.85 percent. For a 30-year fixed rate mortgage in October 2012, rates were around 3.4 percent. In that year, young families discovered that buying a home was 28 percent less expensive than renting.

Millennials should keep in mind that the rent vs. buy gap varies greatly among metros, owing to differences in home prices and rents, property taxes, and home-price appreciation. Taking these characteristics into consideration, young house buyers in the country’s 100 areas will find that buying a home is 5 percent more expensive than renting in Honolulu and 46 percent less expensive in Houston.

The only other metro in the top 100 where buying a property is more expensive than renting is San Jose, where young buyers would pay 2% more to buy than to rent. New York rounds out the top ten, where buying is now 11 percent cheaper than renting for younger customers. 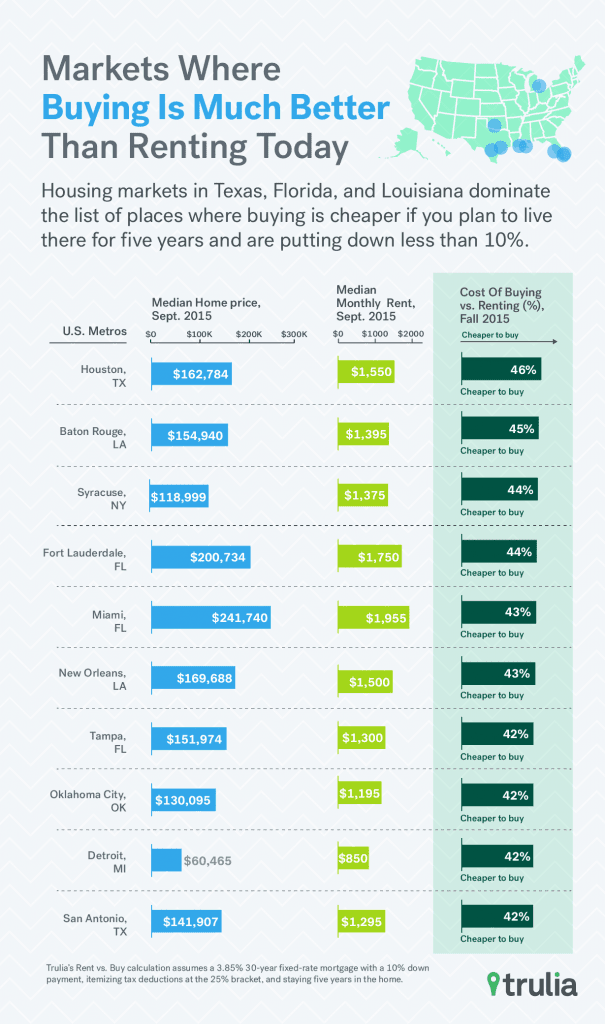 In California, the rent vs. buy statistic is extremely tight for young potential buyers. Seven of the ten markets in the United States where deciding between purchasing and renting is more difficult are in California: San Jose, Orange County, San Francisco, Oakland, Sacramento, San Diego, and Ventura County. Young buyers, on the other hand, will love the Southern and Midwestern housing markets. In many Southern markets, buying is certainly a superior deal. Florida and Louisiana lead the top ten list of cities where young families will find buying a home simpler, with prices 44 and 43 percent lower in Fort Lauderdale and Miami, respectively, than renting.

Since 2012, when the housing market began to come around, many metros have seen dramatic fluctuations in our rent vs. buy statistic. This is mostly due to rising property prices and fluctuations in how much they climb in comparison to rents, and vice versa.

Rent increase has exceeded home price growth in several markets. As a result, purchasing a home is currently a better financial decision than renting in those markets than it was in 2012.

Now, using these statistics to determine whether millennials should rent or buy, do your own arithmetic to see whether it is better for you to rent or buy real estate in Miami. You can also look at houses or listen to an expert speak about the booming Miami housing market here.

Should Millennials Rent or Buy When It Comes to Real Estate? Get the most up-to-date information and make an informed decision on whether to buy or rent a home in Miami.

SHOULD MILLENNIALS RENT OR BUY?

Find great deals, new attractions, free things to do, where to go, where to stay and what to eat in Miami from the experts who know it best. Get information on Miami hotels, Restaurants, entertainment, shopping, sightseeing and more. Any time of the year is the right time to enjoy Miami.
Contact us: mails@miamiallaround.com
© Miami All Around, Inc
MORE STORIES